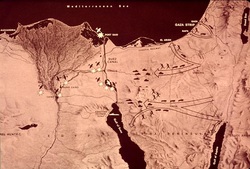 -They had a secret deal that the French and British would join in once this happened
-This angered the Americans and they threaten to cut off the oil if they did not back out
-The crisis is resolved by the introduction of UN Peacekeeping force (Lester B. Pearson's idea)
-Israels economy flourishes under the secure condition
-Changes the influence of power in the region from British and French to Russian and American

Nasser threatens Israel and then decided to nationalize the Suez Canal to make it part of their country. This puts a stress on the world because this canal is used for a lot of trade. Israel feels threatened to they attack under their first strike policy. To solve the crisis they introduced the UN Peacekeeping force that was the idea of Lester B. Pearson who then went on to win a nobel prize for his actions in this crisis. The peacekeeping force went in to make sure that Egypt and Israel could no longer fight.